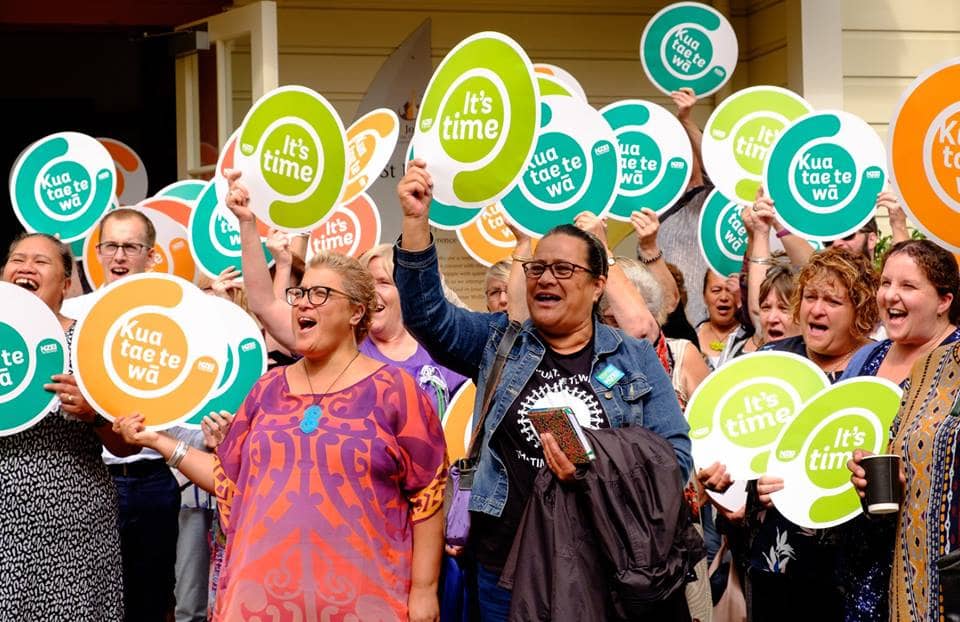 Teachers in New Zealand used Loomio to gain an important victory of increased pay and better working conditions for all teachers.

It looked like the teaching profession in New Zealand was in danger. A report by the Ministry of Education that came out in early 2018, stated that more than 850 teaching positions were urgently needing to be filled – a significant gap in a country with a population of less than 5 million people.

Long hours, large workloads and the rising costs of living in New Zealand (especially in bigger cities like Auckland, Wellington and Christchurch) meant that not as many people were entering the profession and many were leaving, leading to a nationwide teacher shortage.

A campaign to fix the education crisis

Determined to do something about the situation, and improve working conditions for educators, the New Zealand Educational Institute Te Riu Roa (NZEI TRR) decided to galvanize their membership of more than 28,000 teachers and principals into action. The Kua Tae Te Wā (It’s Time) campaign was born.

From the outset, NZEI TRR envisioned the campaign being “by the teachers, for the teachers ” meaning that it had to be shaped by the membership of the union. Practically, however, this posed some issues. While NZEI already had a large mailing list, they needed to find a way to include members in the decision-making process, so the campaign would be truly representative of all those involved in the profession. With so much at stake and a membership pool of more than 28,000 people, an email thread just wasn’t going to cut it.

The NZEI team decided to use Loomio, an online discussion, engagement and decision-making platform.

Our membership is a large, diverse, geographically scattered and busy group. We wanted them to be able to interact with each other to share views and debate ideas rather than just being sent information from our offices. — Jane Porter, NZEI

Throughout the duration of The Kua Tae Te Wā, there were discussions organised in “Loomio threads,” meaning that teachers could easily look up a specific topic they were interested in, learn more and jump into the conversation if they wanted to. Many of these were organised by members themselves allowing them to raise topics of interest to themselves.

Loomio’s integration with email meant that teachers could sign up to receive emails about discussions they were in, directly in their inbox, without having to log into the platform.

Discussions on Loomio and a Facebook group, as well as in-person meetings with union representatives informed the direction of the campaign. A 16 percent pay rise, pay equity, more release hours for teachers, as well as extra support for special needs students were decided on as the desired outcomes.

Initially, the plan was to draw attention to the issue by engaging parents and caregivers, talking to the media and lobbying the government to create change. However, not seeing the desired results, the union membership voted to take industrial action.

After rejecting an offer from the Ministry of Education, on August 15th, 2018, the first strike took place with more than 28,000 primary school teachers and principals walking out to highlight issues facing educators. The strike resulted in the one day closure of 1479 schools across the country.

During 2018 two further offers were made and rejected and members voted to take rolling strike action across the country.

In all cases the decisions to reject offers and take strike actions were done by secret ballot of members. This meant that having the opportunity to discuss their views ahead of voting was important. Many members used Loomio to discuss the offers and options for action if they were rejected. This included things like setting up a poll outlining options for industrial action. Discussion was intense and showed the broad spectrum of views to be taken into consideration.

In 2019 still waiting for the Government to make an acceptable offer, in a historic first, primary and secondary school teachers joined forces in order to take industrial action together. On May 29th, 2019 more than 50,000 teachers, principals and supporters took to the streets around the country. This bold action gathered local and international support, with globally recognised publications like The Guardian in the UK covering the strike.

A victory for primary school teachers

On June 13th, after 18 months of tireless campaigning, teachers in New Zealand won a historic victory – a pay rise of 3% per annum, a new salary top step of $90,000, and pay parity across the sector -a collective agreement offer worth around $1.5 billion NZ dollars.

Upon receiving this offer from the government, members took to Loomio to discuss whether or not to accept it. Primary school teachers voted overwhelmingly in favour, while principals chose to reject the offer.

While this particular offer didn’t address all of the campaign demands, it was still a significant victory for the education sector, improving working conditions for thousands of teachers across the country.

Using Loomio to engage members throughout the campaign

Throughout this campaign it was important that every member had their say – Loomio helped us do that. Members who previously had not contributed to discussions became active contributors to campaign ideas. — Barb Curran, NZEI

This sentiment has also been echoed by others. "I think Loomio is a very effective communication tool that helped me stay up to date with what was happening and enabled me to make informed decisions." said Callum Wong, a primary school teacher.

Throughout the campaign, members regularly used Loomio to help make important decisions. For example, they took to Loomio to discuss and debate options for industrial action, determine how to engage with the wider community and discuss what kind of pay increase options people would be happy with.

A turning point for the education sector

Overall, this victory marks an important turning point for the teaching profession in New Zealand and demonstrates the power of collective action. When teachers are supported to do their job, everyone benefits; most of all students.

NZEI TRR is the largest teachers’ union in the country, with approximately 50,000 primary and area school principals and teachers and support staff within primary and secondary schools, as well as early childhood teachers and special education providers.

They negotiate members’ salaries and work conditions, coordinate campaigns on education policies, support new educators with relevant professional development programmes and assist members with any issues relating to their employment.