Taking Holacracy Governance to the Next Level 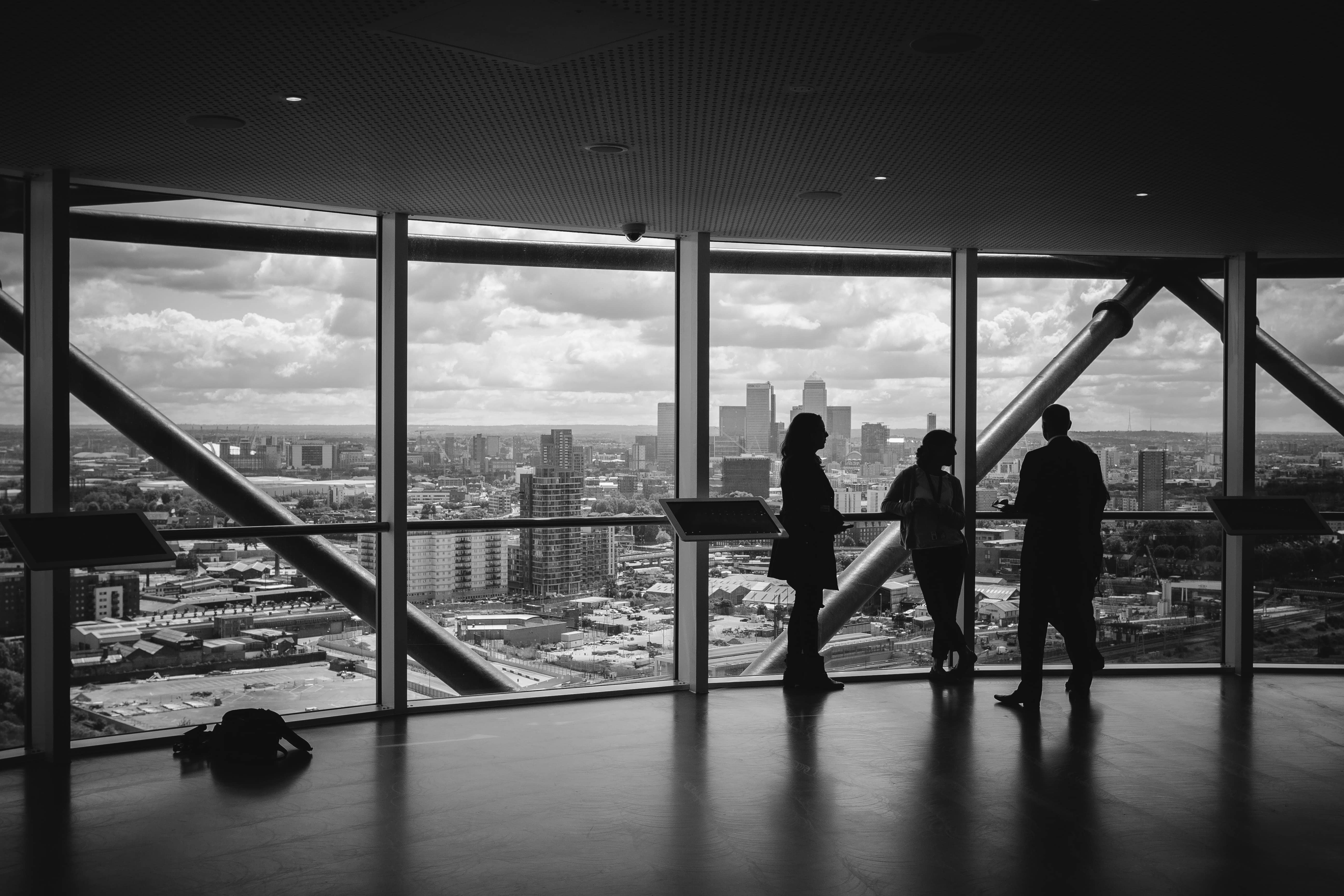 Organisations that adopt Holacracy often find it’s a big upgrade to their decision-making processes. But implementing Governance meetings is only the beginning of your self-management evolution.

Dogmatists may staunchly defend the completeness of the Holacracy Constitution, but I believe on drawing from everything available to craft the right system for your unique organisation. Even if you’re not sold on Holacracy, there are tools in it that can be super useful for any team. One of these elements is Integrative Decision-Making.

In Holacracy, Integrative Decision-Making is the process in a governance meeting where an individual brings a ‘proposal’ to create, amend, or remove roles, policies or structures. The group works on the proposal until there are no objections and it can be adopted. 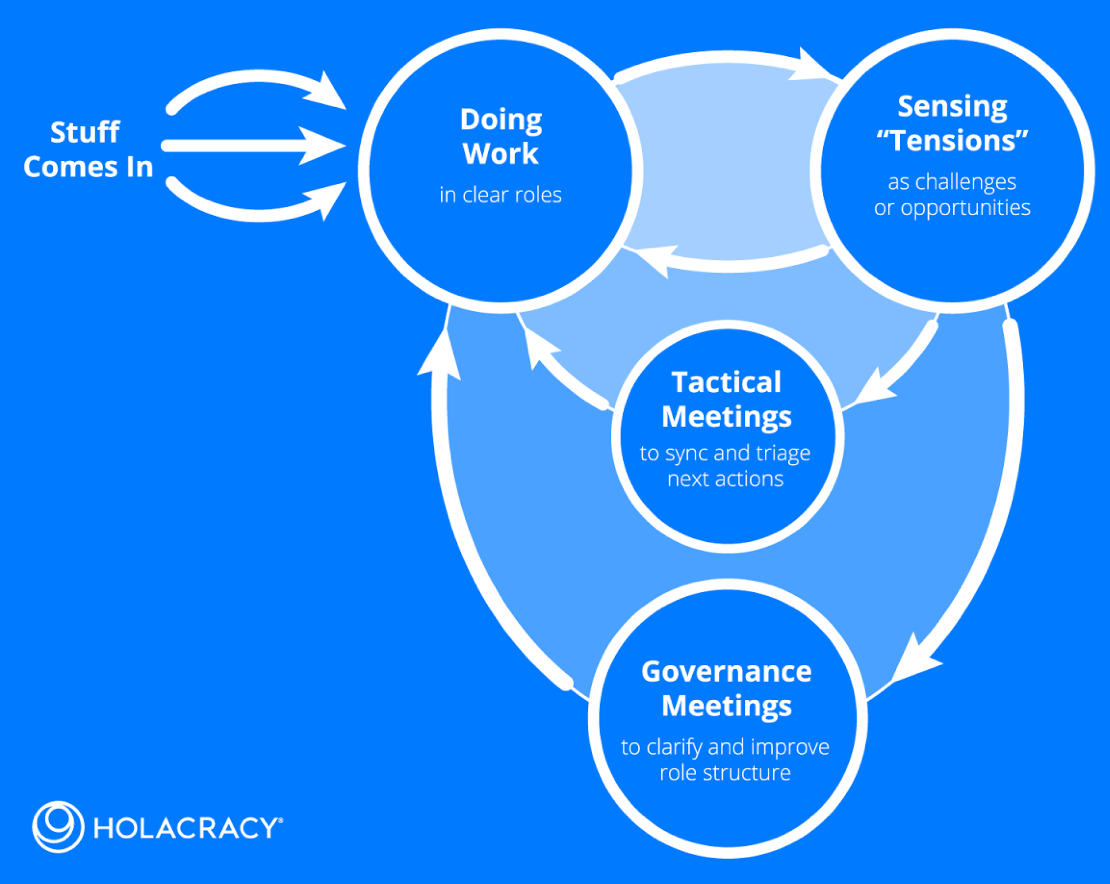 This process is often criticised for being mechanical and ‘soulless’ (one of the common criticisms of Holacracy overall). The system does attempt to overcome this by allowing a round of ‘emotional reactions’ to be raised.

I think teams can go further, and improve the process significantly. By incorporating the advice process and enabling effective asynchronous deliberation online, the governance process can become an incredibly powerful and efficient engine for self-organising continuous improvement.

Loomio is a software tool designed to enable groups to make decisions though building shared understanding.  It’s used by thousands of groups around the world, from businesses to governments to NGOs. It’s especially powerful for self-organising teams.

Holacracy, like Teal and Sociocracy, advocates for ‘consent-based’ decision making, using an Advice Process. As long as the proposer has sought feedback from those that would be impacted by the proposal, unanimity is not required.  In Holacracy, the only thing that can ‘block’ a proposal from being adopted is if it is either fundamentally unsafe to try (would cause harm), or would clearly take the organization backward.

Many groups use Loomio for consensus decision-making. Some interpret that to mean unanimity (everyone agreeing) – but it doesn’t.

Equating consensus with unanimity is to deeply misunderstand it.

Giving consent does not necessarily mean that the proposal being considered is one’s first choice. Group members can vote their consent to a proposal because they choose to cooperate with the direction of the group, rather than insist on their personal preference. Sometimes the vote on a proposal is framed, “Is this proposal something you can live with?” This relaxed threshold for a yes vote can achieve full consent. This full consent, however, does not mean that everyone is in full agreement. — Wikipedia on Consensus Decision-Making

Once you get past the common confusion between “consensus” and “unanimity”, you realise that there’s a very good reason why “consensus” and “consent” come from the same root. Loomio, as a tool originally created to support consensus processes, is perfectly designed for consent-based decision-making.

Here are the steps you can use to bring your Holacracy Governance process online.

Set up the Process

Have a Governance subgroup.

If the group is following the Holacracy Constitution, a facilitator should be appointed.  Or the group might decide to collectively hold that role, or the proposer can facilitate.  The protocol can be specified in the group description on Loomio.

A speaker describes a tension (issue, improvement, system change). The proposer can request some discussion in order to get to a proposal.

Start a new discussion thread.  Give it a title, and explain the context of the tension.

Anyone can ask questions to better understand the proposal. The proposer can answer, or say if he or she doesn’t have an answer.

It’s not allowed to use clarifying questions to give an opinion. Opinions, suggestions, reactions, all should be left for the Reaction round. The Facilitator will cut off any question that’s conveying an opinion or isn’t intended at better understanding the proposal.

Group members are notified of the new discussion and can post clarifying questions as comments. The original poster can respond with answers.

The proposer come up with a proposal to address the tension as he or she senses it.

The proposer starts a Loomio proposal. This can occur straight away when the initial discussion is posted, or they can opt to let clarification go on for a time before putting the proposal forward. The proposer sets the duration of the proposal.

One at a time, each person reacts to the proposal as they see fit. No response or interruption is allowed during someone’s reaction. Any type of reaction is welcome, from intellectual critiques to emotional outbursts. The only caveat is that reactions should not be engaging someone in particular. Everyone reacts except the proposer.

Reactions are the only step of the governance meeting when people can speak freely. It’s a perfect phase for providing different perspectives and suggesting improvements to the proposal, so that the proposer can integrate those changes if he or she likes them. 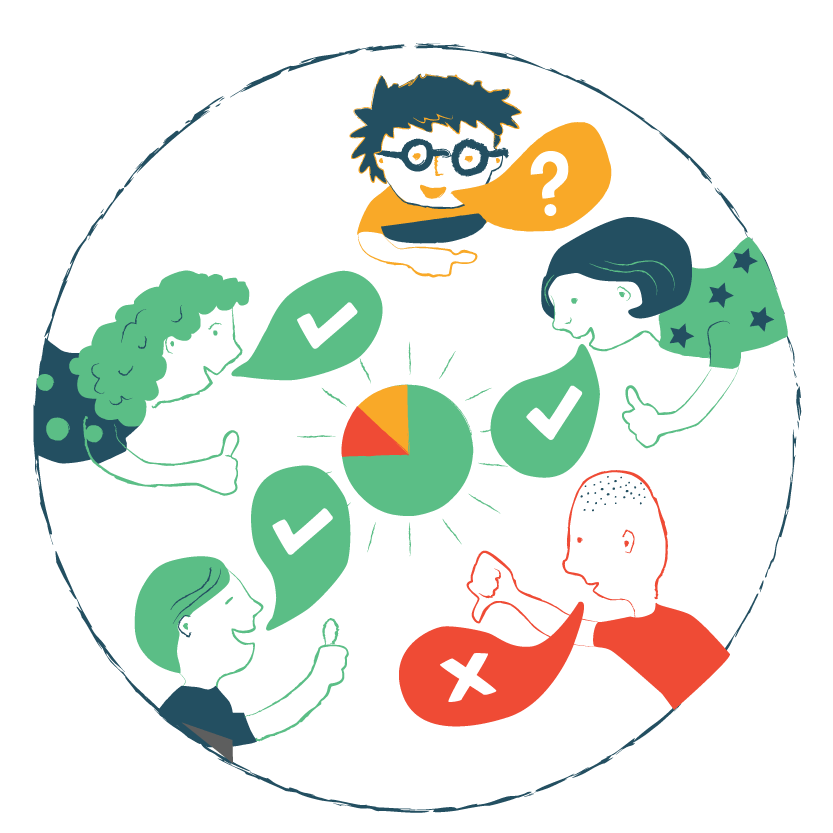 A Loomio proposal automatically invites each participant to state their position (agree, abstain, disagree, block), along with a short statement about their reaction. (This step incorporates the Objection round in Holacracy – see below).  The proposal starter sets the timeframe, and the system notifies everyone before the deadline.

Participants on Loomio can change their position as they hear other reactions. The system captures and displays the history of their reactions and their current position.

After all reactions are complete, the proposer can optionally clarify the intent of the proposal, or amend it based on the reactions. Only the proposer speaks; no discussion allowed.

Although the proposer can modify the proposal however they want, the goal is for them to find a better way to address the tension. It’s not their job to address all the concerns and reactions heard during the round, or even to make improvements that were suggested by other participants.

Loomio summarises all the positions visually, along with a succinct summary of the reaction statements, and a record of the comments and clarifying questions. The proposer can take them into consideration.

The proposer posts an Outcome Statement, which is automatically sent to all participants. It can indicate that the proposal has passed and what the decision is, or that it has not passed and if the matter will be dropped or if a new proposal iteration will be forthcoming.

One at a time, the Facilitator asks each participant if they have an Objection, that is, if they see “any reason why adopting this proposal would cause harm or move the Circle backwards”. The proposer also gets the opportunity to raise an objection.  If there is no objection, the proposal is adopted.

If there is an Objection, the facilitator moves to the Integration Step, which provides the opportunity to discuss the objection, to understand it fully, to draw out the validity of the objection.

The Objection round is built into the Reactions (when the participant states their position), because one option each participant has is to Block.

Both the Loomio Block function and the Holacracy Objection come from the same tradition of consent-based decision-making, and they carry the same function. If a proposal is blocked, it will not pass.

The ethics of consensus decision-making encourage participants to place the good of the whole group above their own individual preferences. When there is potential for a block to a group decision, both the group and dissenters in the group are encouraged to collaborate until agreement can be reached. Simply vetoing a decision is not considered a responsible use of consensus blocking. Some common guidelines for the use of consensus blocking include limiting the allowable rationale for blocking to issues that are fundamental to the group’s mission or potentially disastrous to the group.

On Loomio, integration is achieved through online discussion to understand the block. Individuals can change their position while the proposal is still open (remove their block), or that proposal might close, at which point the matter can be closed or a subsequent iteration can be proposed that addresses the concern.

Many of the organizations I work with who are experimenting with self-organising struggle with two fundamental realities:

Systems like Holacracy give participants confidence and competence with its elements because they are clearly defined. It’s tempting to consider them “complete” and not try to get creative with evolving and adapting them. But to address the above two challenges, we have to use every good tool we can.

Thoughtful tools like Loomio can liberate capacity by engaging asynchronously. They provide self-paced learning opportunities to build individual and team skills. Loomio allows people to engage with processes and behaviors they may have never had the opportunity to previously.

Bringing governance discussion and decision-making online means you can have fewer governance meetings, saving countless hours, while still addressing important tensions. This is the definition of “lean”. It gives team member a chance to build skills for collaboration in clear, easy to engage with processes they can participate in anytime, anywhere.

Critically, having some governance discussions online also means that, when you do invest in bringing people together face-to-face, you can use that precious time to dig deeper into more complex issues that require higher bandwidth engagement. The online space will never replace meeting entirely, but it can greatly enhance how you use meetings, and the effectiveness of your collaboration processes overall.

Susan Basterfield is a catalyst, cultivator, and agile coach, who helps people experiment with new ways of working and being, to actualise the workplace of the future. She’s co-founder of Enspiral Labs, experts on next-level tech enabled self-organising.

You can reach her at susan@enspiral.com